Collective worship with Roger Fernside - always a big hit with the children!

Open Classroom and Macmillan Bake Off

Church Service - The Ascension and the Pentecost

Well done to everyone for supporting Children In Need so splendidly!

Here are some examples of the fantastic 3D homework families have been completing over the last few weeks. The quality and creativity of the work is truly outstanding. Thanks everybody for your fantastic efforts. Mr Mensah

SSOC Cake Sale-December 16th....thank you so much for all your support

A massive thanks to Apple Class, Mrs Blacknall and Mrs Smith for visiting Sherwood Pines last week and choosing our wonderful Christmas tree for this year. It now stands proudly in the school hall decorated with hanging ornaments designed by all the children-it looks wonderful.

Well done to you all!

WOW! Bleasby raised just over £424 last week. Children up and down the country will be so pleased to be offered opportunities to help and support them in the future...a massive thanks to everyone involved!!

Bleasby really got behind Pudsey Bear today with a terrific day full of learning, fun and food! Mrs Price kicked it all off with a super assembly and dance followed by learning about different children supported by the charity. Y4 and 5 pupils designed their own mood boards having learnt about Logan and his Cerebal Palsy. The day was topped off with a tremendous cake sale that raised a stupendous £186.71. Added to the donations brought in by the children in the morning we currently have a total of £344.11. I still have ALL those 1p's and 2p's to count but we are hoping to get close to £500!! This has been a terrific day pupils enjoyed their day and that they have more of an understanding of how this amazing charity works. Look out for the cake sale on the Midlands Tonight section of the CIN evening!! We could be famous :)

I would like to say a huge thank you to all those parents and children who baked and brought cakes in for the sale and for everyone for spending some time supporting less advantaged children across the country. 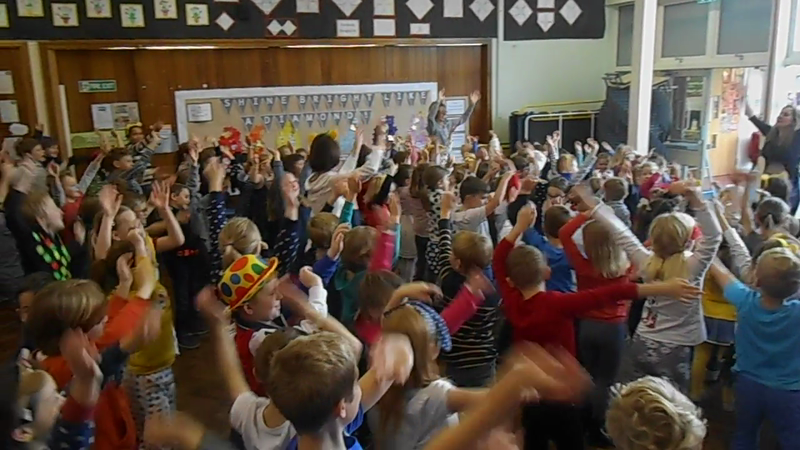 What a way to kick off Children in Need with Mr Price explaining why we support such a worthwhile cause every November and showing us some funky moves to One Direction at 9.30am-truly unmissable stuff!!
What a legend you are Mrs Price...we all loved it! A massive thanks.

Children in Need 2016-What a wonderful day 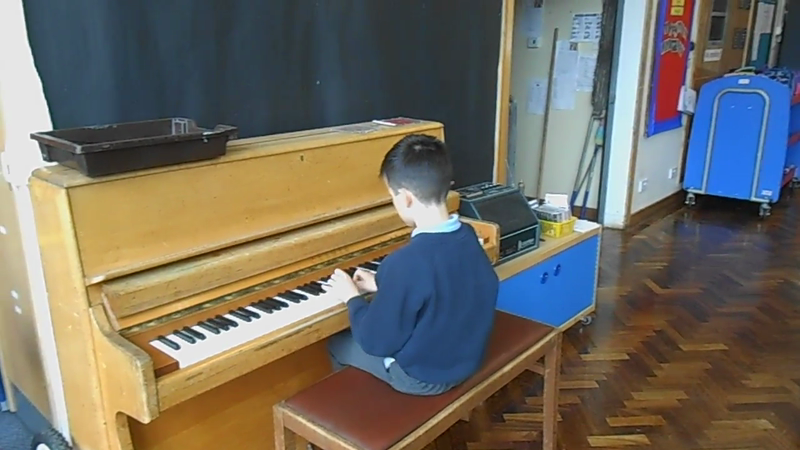 The force has been very strong with Daniel Lane in Y5 this term as he has entertained us with his Star Wars theme at the beginning and end of every Jedi Maths assembly. Please enjoy a snippet of his work. The First Order is very impressed!!

Years 4, 5 and 6 were thoroughly entertained today by Steve Webb, author of 'Spangles McNasty and the Fish of Gold'.

He was very engaging and told the classes how he became an author and how he managed to find all his ideas for writing such books. The children were an absolute credit to the school as they listened intently for 75minutes and were chomping at the bit to purchase this wonderful book...staff as well!!

We would like to thank Steve, especially for his time today and we all wish him well for the future and his next instalment 'Spangles McNasty and the Tunnel of Doom' released in 2017. We would also like to thank Louise at the Lowdham book shop for organising this visit-much appreciated.

A big congratulations to all the children who were voted for by class teachers last week whilst showing the Olympic values. Treasure those medals!

Also a massive congratulations to Luke Barry who has played for the most number of sporting teams this year and represented the school with pride at all times-wonderful achievement.

Olympic Values Winners 2016-congratulations to you all

Our final day of sports at Bleasby has seen pop lacrosse for the Y6 team who will representing Newark and Sherwood District at the Sainsbury's Games Finals on 8th July. A huge thanks to Mike Aspinall for coaching the team so well. Mrs Smith taught Y6 how to ride their bikes with attitude around their circuit whilst trying to compete against other pupils-great fun!

Finally a huge thank you to the BSFA  and Mrs Carpenter for organising the Bounceathon, the children have not stopped all day and it has been wonderful seeing their smiling faces throughout the day.

I would just like to add my thanks to the following people this week who have made all this sport possible: Mrs Davis (what a star!), Mike Aspinall, Urban Hockey, BSFA, all the staff and pupils at the school, Carnival Dance, Suggy's Gym, Kick Boxing, Mr Scurfiled, Mrs Tavernor, the parents who delivered the KS1 boot camp, Mrs Smith, Jo Edinborough, Shine Yoga, Norwood Golf and all the parents who have given their time to support this wonderful school. Roll on next year!

What a lovely day of sports again as every class had a chance to see some Olympic records and compete in the 1500m which was just super to watch across the school-well done to all the pupils. KS2 had a chance to compete against each other in fencing and KS1 had their very own gymnastics sessions. The area sports event showed off the talent that Newark and Sherwood schools have and Bleasby did very well indeed with medals for the Y3/4 and Y5/6 girls relay teams, 800m for Y5/6 boys and girls in two tremendous races, Y3 boys 60m sprint and girls open javelin final. The standard was exceptionally high but all the children displayed courage and determination to succeed and had a fantastic attitude all afternoon.

Another fun-packed day started with street hockey and multi-skills with Mrs Smith-great fun! The afternoon saw carnival dance and boot camp, run by Mrs Tavernor and Jo Edinborough challenging all pupils on their speed and agility. We look forward to our new Olympic record challenges tomorrow and also SPORTS DAY where the children will have an opportunity to gain points for their coloured house and have a lot of fun along the way.

What a great start to the week-RAIN! However at Bleasby we don't mind a little of the wet stuff and the KS1 rugby certainly kicked off in the wet this afternoon. in style. Boot camp was a huge success this morning with every child challenged and motivated, a big thanks to our two mums who set it all up and thoroughly enjoyed themselves. The kick-boxing was a big hit! Great skills and a lot of fun. Bring on the rest of the week.

The Y3/4 team had a very successful afternoon at Blidworth Oaks on Friday 17th June. They won their first match 8-0 with James Collett scoring 5 and Zac Marshall 3. Their second game was a very hard-fought game against Blidworth A ending 0-0, moving on to a solid performance against St Mary's with a 4-0 win. Playing the eventual winners, Abbey Gates, showed the team that pace and space works well on a football pitch and they succumbed to a 5-1 defeat before beating Python Hill 2-0 in their final match.

I would like to thank all the players for trying their hardest, scoring 15 goals and conceding 5 in what was a lovely afternoon of football. The medals around their necks made them feel very proud indeed. A big thanks to Mr Barnes for his support throughout the afternoon and keeping the players warmed up on the practice field!

The Y6 pop lacrosse team qualified for the finals of the Sainsbury's Games last week. They played five games in Newark and won all five, scoring 24 goals to one conceded. A massive achievement by the whole team. They move to the finals on Friday 8th July 2016-GOOD LUCK BLEASBY!